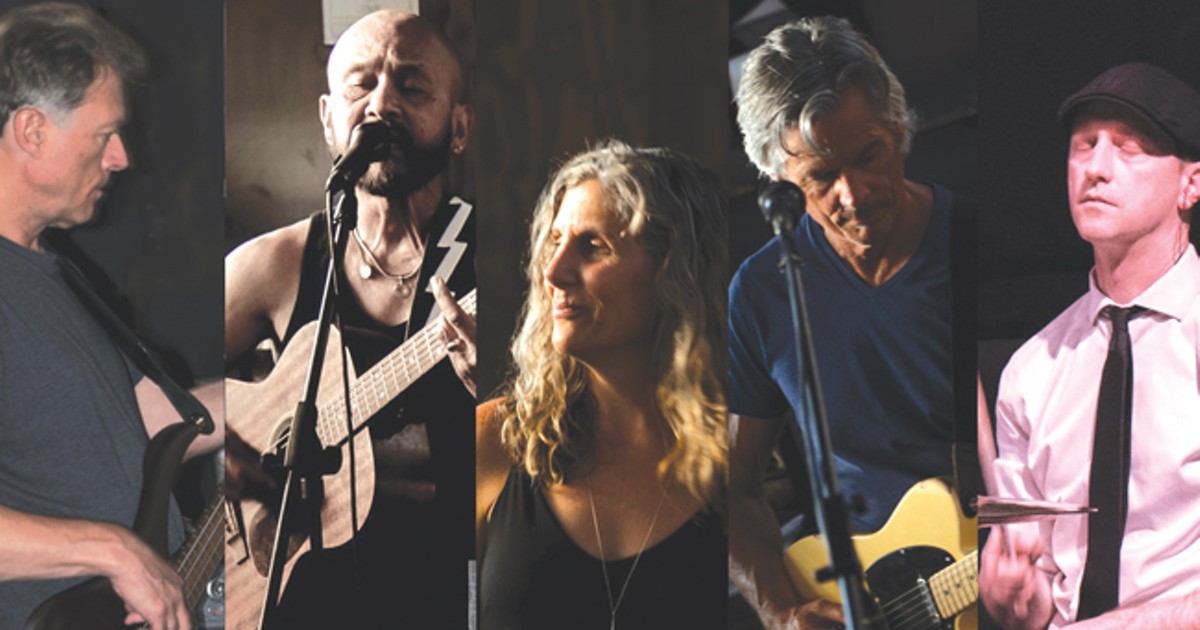 Mark Quon has been playing and creating music in central Oregon since 2005. You know him for his work with The Quons, the folk duo with his wife and musical collaborator Linda; Parlor four folk rooms; and David Bowie tribute band Aladinsane, who play their final gig on July 6 at Worthy Brewing. The five-track debut is packed with vivid imagery and soothing sound that will draw listeners in.

“We’ve been together for about three years now. It’s our first recorded album. The band kind of grew. It started as a trio, and it was myself, Terrence Neal and John Allen. Then we added my wife Linda and Matthew, the drummer; he’s our newest addition,” Quon said.

Something I noticed immediately about “The Innocents” was its storytelling, which Quon emphasized he wanted people to focus on. Throughout the 12 songs, there’s inspiration from all points of Quon’s life: his friends, and even the world around us.

“My Life” was inspired by Quon’s father, with the discomfort and dissatisfaction of letting go at the end of his life. “Road I’m Runnin'” is inspired by his brother’s struggles and is a song that can be important for anyone who is going down a tough road. Then there are songs from his own dreams, and sometimes from other people as well.

“I get a lot of inspiration from dreams. I’m a bit of a heavy dreamer and a bit of a dark dreamer. When I tell people about my dreams, they’re like, ‘What the hell is that?’ , Quon shares. “‘Into another Dream’ is not about my dream, it’s about my wife’s. I could hear her laying next to me, and you can tell when someone’s having a bad dream, you know? I reached out and tried to shake it This song is about someone else’s experience and wondering what they’re dreaming about.

The title track of the album is one in particular that struck me on first listen. Opening with the chatter of birds and the natural world, the song reflects on and attempts to envision what Earth might be like without the humans living on it. Thanks to Marvin Gaye and what Quon calls his pessimistic attitude, the song is a beautiful, sad and powerful opening. It also happens to be one of Quon’s favorites.

“This song was born – my wife and I were painting the living room and Marvin Gaye’s ‘Mercy Mercy Me’ came out, and I remembered this song when I was a teenager. I had forgotten about it and I realized how he was singing about the environment and the destruction of the Earth and that kind of inspired me to write a sequel. I’m a self-proclaimed pessimist that I know we’re never going to figure it out,” he said.

Quon warns that this album isn’t the one for you if you’re looking for a soundtrack that feels good and motivates you. If you’re looking to be moody and reflect on certain things in life, then DRIFT is the way to go. As a band in general, these five musicians make music that many don’t hear too often in central Oregon.

“I think our music is different from most of the music that happens in central Oregon. There are a lot of jam-type bands, or bluegrass bands, and this band is none of them. C “It’s more of a reflective music and storytelling. It’s like the singer-songwriter puts more emphasis on rock. It’s definitely not a dance type of music,” Quon laughs.

Those interested in the launch party can obtain tickets online at bendticket.com. There will be a small amount of physical CDs available, and “The Innocents” is also available on Bandcamp, Apple Music, and Spotify.