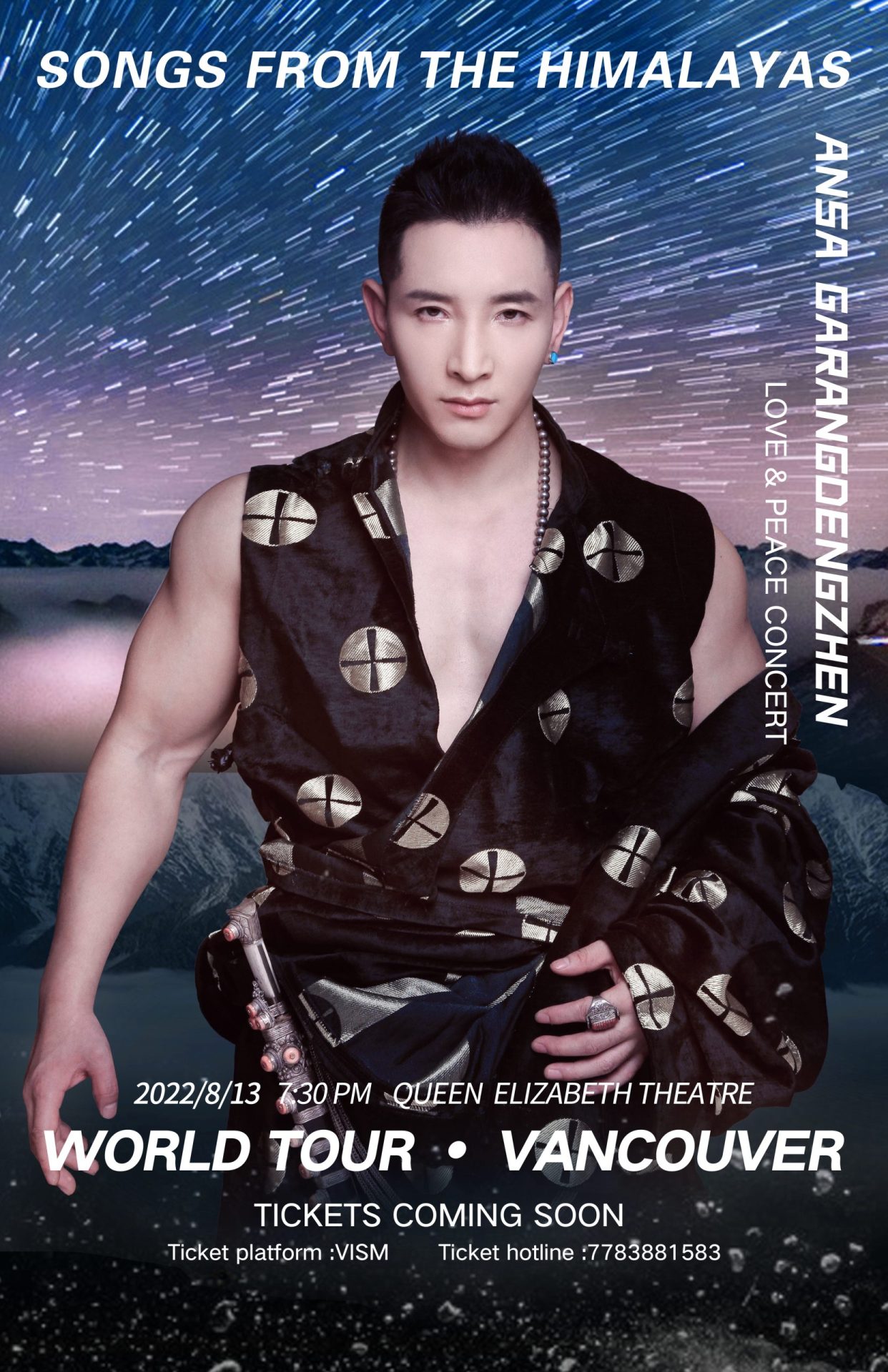 Ansa GaRangDengZhen brings his timely message of love and peace to the Queen Elizabeth Theater for his ‘Songs from the Himalayas’ tour in Vancouver on August 13, 2022 and is currently busy working on new music.

(YourDigitalWall Editorial):- Vancouver, British Columbia May 16, 2022 (Issuewire.com)- Ansa.GaRangDengZhen (the English name is Zen) is a multi-award winning Tibetan singer-songwriter and producer, at the forefront of a new generation bringing inspiring folk and world music to the masses. Hailing from the snowy plateau, this musical genius brings unique styles and powerful vocals to Chinese music while fulfilling his dream of teaching compassion and supporting charities around the world. He showcases the unspoiled beauty of his ethnic voice with a contemporary yet simple musical concept, creating soulful and masterful compositions.

He became a global sensation after winning a Chinese Talent show and was recognized as one of the top ten singers of the year, along with many other achievements. This earned him a spot as a regular special guest for CCTV and many other TV channels. He rejuvenated Chinese folk music to audiences during his world tours. Immediately after, he received the American Award for Love and Artistic Contributionthe Honor to British charity artist and Performer Award in Australia, Egypt, Qatar and Canada.

He has a long history of activism, charity and humanitarian work which is reflected in his transformative art. In his more than 20 years of singing, composing and performing, he has won more than 20 awards in China and abroad, contributed music and raised funds for stem cell research, earthquake relief, leukemia, the International Children’s Fund, and other causes of human well-being. Zen was appointed ambassador of the Canadian Liver Fundthe China Foundation for Poverty Alleviationand the Tibet Relief and Development Foundation. Zen also proudly served as tHe is vice-president of the Tibetan Performing Arts Alliance.

In 2016, he was invited to attend the Canadian International Film Festival as a representative and won the Contribution to the Performing Arts Award. The next year, Zen participated in the week Canadian Maple Leaf International Film Festival series of events with the documentary “To turn the mountain of God with a long head” as chief planner and chief producer, and won the Single Award for Best Documentary Character.

In January 2018, Gajang Deng Zhen embarked on a North American tour of Hard Rock Casino which was presented by representatives of the Canadian Parliament.

Ansa GaRangDengZhen brings his timely message of love and peace to the Queen Elizabeth Theater for his “Songs of the Himalayas” toured Vancouver on August 13, 2022 and is currently working on new music. Zen’s current releases include the single “Alay” (2020) and full albums “Global Village” (2018) and “Songs of the Himalayas” (2016). Tickets for the highly anticipated Vancouver show are available here: https://bit.ly/3M3bdvq.