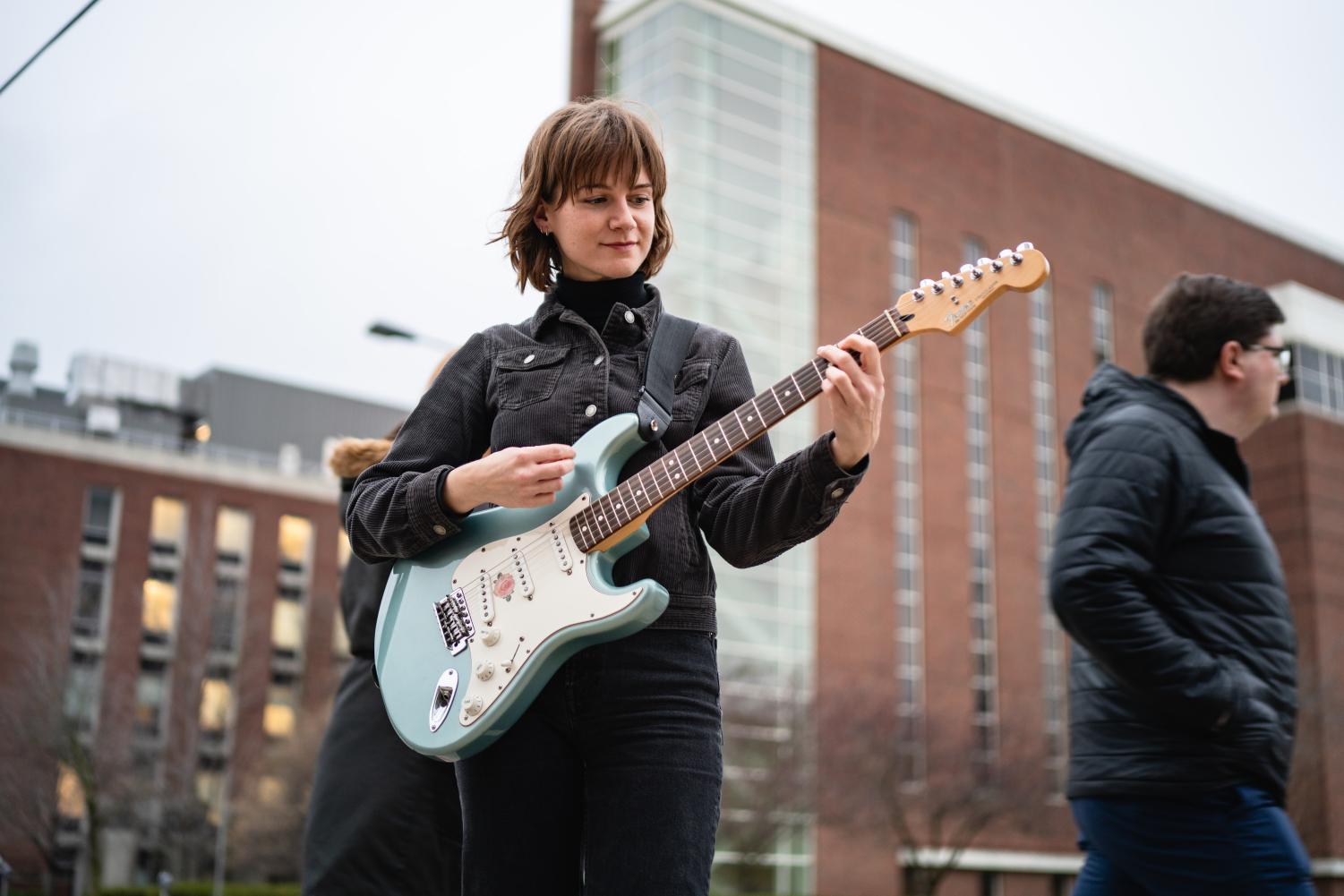 Kamila Glowacki plays her guitar by Oregon Street and Goodwin Avenue on April 5. Glowacki, founder of the band Nectar and alumnus of the University, offers insight into her positive relationship with the CU region, which often inspires the creation of her songs.

For artist and musician Kamila Glowacki, Champaign-Urbana is where she decided what her “home” was.

After growing up in Arlington Heights, Illinois, Glowacki moved to CU when she started her freshman year in college.

She completed her bachelor’s and master’s degrees at the University – in 2013 and 2018 respectively – and started working at the Krannert Art Museum in 2014. She is currently working as the Acting Director of Education.

While at the museum, Glowacki said she was most proud to launch Art Remastered, a program that invites local musicians to write songs inspired by the artworks on display and perform them in the galleries.

“It’s really rewarding to use my role in the museum to support musicians and create a space for them to expand their songwriting process in a way that I think is out of the ordinary. “, she said.

In addition to his work at the museum, Glowacki also founded Nectar, a Champaign-based indie punk band that is releasing its second album, “no shadeon May 13.

Glowacki is the vocalist, songwriter and lead guitarist of the band, which formed shortly after graduating from high school in 2013.

Nectar’s latest music video for his song “Routine” features local businesses like Plant Mode, Corson Music and Common Ground Food Co-op. Glowacki said the video was a “love letter to all the local businesses I love here and the weird places that are special to me.”

“I think there’s just a weird charm to Champaign-Urbana,” she said. “And more and more, I’ve tried to embrace that and share it through Nectar.”

Glowacki creates the illustrations for most Nectar releasesincluding his latest album.

She painted the artwork for “No Shadow” using oil paints. She chose oil paints to challenge herself and reflect the process of creating the album.

“It wasn’t something I could pull off in one night,” she said. “I must have spent months painting it, and I feel like it really reflects the process of recording the record, like we spent months doing. So I wanted the artwork to art carries the same kind of intention and time.

Glowacki said she had always been a songwriter. She wrote her first in elementary school, titled “Bye Bye Butterfly”, and began learning guitar and bass in middle school.

She credits the local music scene for helping her find her own path in CU.

“Coming to (college) for school was really what made the music scene accessible to me and meeting people who played in other bands and going to shows and how much people sustained,” she said. “That’s what really pushed me to go ahead with writing my own music and starting my own band.”

Glowacki chose to stay at CU because it’s “such a beautiful place to come home to” and because it’s also the first place she lived on her own and decided what “home” meant to her. .

“I appreciate the communities here,” she said. “All my neighbors are so nice, and then the music scene is great, and I like how small it is.”

Glowacki said Nectar played a part in his decision to stay at CU because of the friendship and collaborative opportunities it afforded him.

“We were able to connect to each other in a very powerful way through the songs, so I didn’t want to lose any of that by moving,” she said. “Trying to find people I connected with in that way would have been difficult.”

As Nectar gears up to release “No Shadow,” Glowacki said the band are working together as a unit in a way they’ve never realized before.

“I think there’s this mutual love and appreciation to play whenever we can because there weren’t those opportunities in the past,” she said. “It makes things even more special when we can come together to train or play shows.”