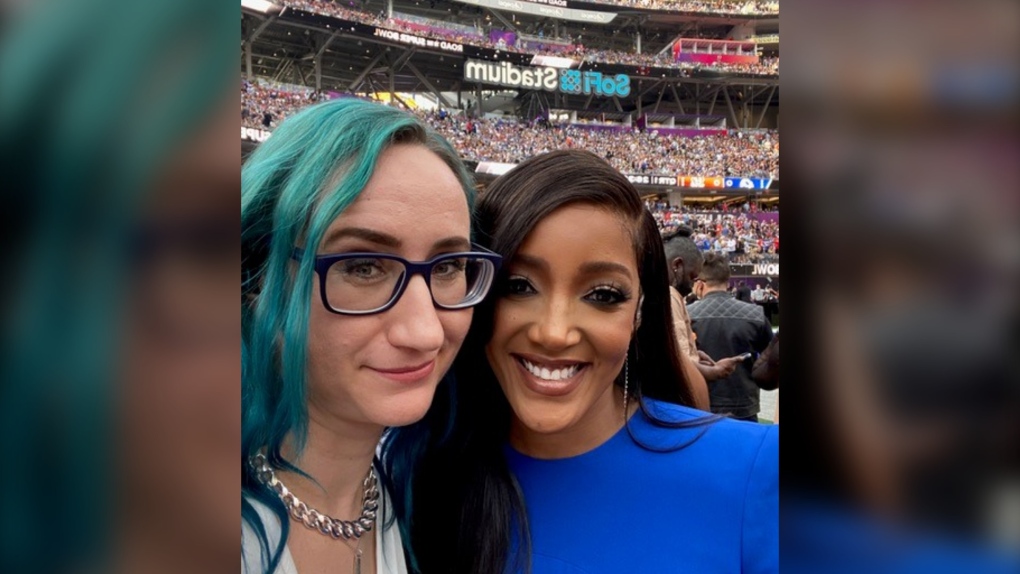 A Winnipeg woman took an item off her to-do list over the weekend as she performed at the Super Bowl.

Music producer and songwriter Karen Kosowski helped arrange the national anthem performed by Mickey Guyton at the Super Bowl and she was a part of the performance as well.

“Holy moly, we just did the Super Bowl,” laughed Kosowski in an interview with CTV News.

She said she has worked with Mickey Guyton since arriving in Nashville in 2018 and has helped produce and write music with her.

The national anthem is sung prior to the NFL Super Bowl 56 football game between the Los Angeles Rams and the Cincinnati Bengals on Sunday, Feb. 13, 2022, in Inglewood, Calif. (AP Photo/Matt Rourke)

She said Guyton asked her to be part of the Super Bowl performance in December.

“It was a long process of working on the choir parts and the piano and figuring out how everything was going to work. And Mickey, she’s based in LA right now. So we were on Zoom a lot, working everything and testing things out. and trying things out for the arrangement until we found something we really liked.”

Kosowski said she came back and watched all of the previous National Anthem performances at the Super Bowl to help her prepare for this opportunity.

Regarding the day itself, she said the energy at SoFi Stadium was unreal as they prepared to play.

“It’s just a commotion. The stands are full of people and there’s so much going on and I just sat there feeling the energy, the intense energy. It’s something I’ll never forget.”

“It’s one of those things you never really dream about…and I have to tell you Snoop knows how to make an entrance in the green room. We heard this music playing and he walked in and he had this big boom box of 90s style on his shoulder and he just walked into the green room.”

Thinking back to her roots in Winnipeg, where she started playing the piano in South St. Vital, she said she was very proud to be able to represent the city on such a big stage.

“The Super Bowl has such reach and I’ve gotten so many cool messages from people I haven’t heard from in years. People I was with in high school at Glenlawn Collegiate or my former band managers .”

The bucket list items aren’t done for Kosowski just yet, either, as she’s now gearing up for the Grammys.

“Mickey’s record, which I was majority producer on, is nominated for three Grammys and I’m going to be able to go to the Grammys for the first time in my life. So I’m really excited about that. It’s crazy.”