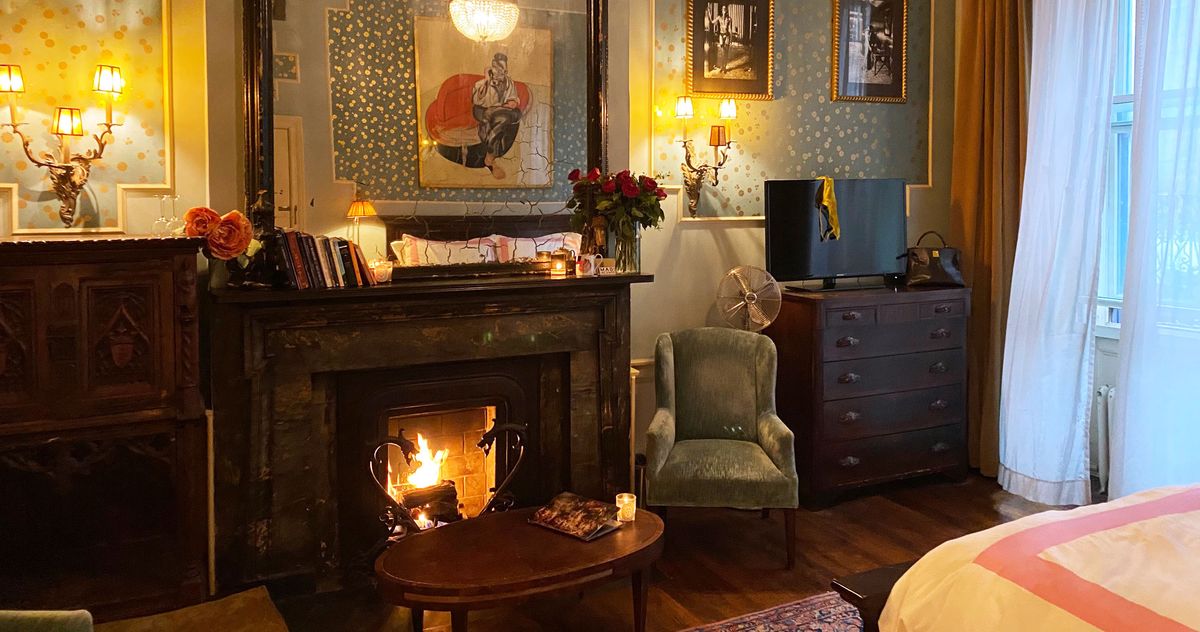 Chase Cohl grew up in Canada and spent a lot of time in Los Angeles, “but New York has always been for me,” she says.
Photo: Max Robinson

Chase Cohlsongwriter, poet and fashion designer, looks like a New Age Los Angeles hippie with her long hair parted in the middle sporting her sheepskin coat when she returned from walking Dad, her Irish Greyhound, who then settled into her bed dog in front of the fire. Cohl and Papa lived together in two rooms adjacent to the Lafayette House, an 1848 brownstone owned by Eric Goode and Sean MacPherson, the people behind the Hotel Bowery, for two years. It’s not exactly a hotel – you can’t just rent a room on Expedia. It’s more of a creative community, almost a club, full of artists and musicians who want privacy. It’s a bit like Chateau Marmont, a bit like the old Chelsea hotel.

“It’s such an inspiring place,” says Cohl. “I wrote a record here in two seconds. I mean, how could you not? »

Cohl grew up around music since his father was leading bands. Home was Toronto, but she traveled a lot. She moved to New York when she was 17, then to Los Angeles, where she has a home in Laurel Canyon which she says “looks like it’s in the Cotswolds.” During the pandemic lockdown, she was one of many Angelenos who moved to New York (it wasn’t just the other way around). She had planned to live in her parents’ Soho apartment while they retired to the countryside. But when they came back early and gave her the ultimatum that she either cower with them, without seeing her friends, or find another place, she was out. She knew someone who knew someone who gave her the green light to live in Lafayette House.

His plan was to hang around while looking for an apartment. But as soon as she opened the door to her digs, it felt like stepping into a dream on an unusually cold day. The (gas) fire was blazing as I visited the cozy bedroom adorned with patterned wallpaper and ornate sconces with only a flat screen to bring you back to modern life. The illusion that the Golden Age reigns here is quite compelling, as is the lore of the haunted building.

“Initially I was just in the front room with overflowing clothes and spent five months there,” she says, until she marks the second room accessed by a hallway lined with closets.

Her new album is out in September, as part of a larger project she’s been working on for a few years. “I co-wrote this record with Barry Goldberg, who was, among other things, Bob Dylan’s pianist for 45 years. He plays in a band with Stephen Stills, he played with Ray Charles, he played with Phil Spector – you name it, and he played with them. He’s like one of the last legends. They had worked together at one of Cohl’s sessions years ago, and then during a chance meeting at the supermarket, Goldberg had asked her if she would be interested in working together again. “When we sat down,” she admits, “it didn’t come naturally until we started talking about 1960s girl bands and how special that music is and nobody does it. And we thought we’d give it a shot. I grew up listening to the Ronettes and the Shirelles, and it’s instantly nostalgic; it’s always coming-of-age time. But now, especially in As a creative person and a woman, I just can’t support “He Hit Me and It Felt Like a Kiss” – the girlish agenda of this music and the desperation of the girl who won’t live if she the guy dumps her. I was like, ‘Let’s write the feminist version of the girl group record.'” She released the first four songs as volume one last summer in an EP and is now mixing volumes two and three, which, according to her, will be done in the coming weeks. “Oh, and I’m composing a short film in Los Angeles,” she says, where she runs the Laurel Canyon house.

The hallway lined with cupboards leads to a second room which also has a fireplace and serves as a guest bedroom and workshop. “I moved in with my dog, my clothes, and my guitar,” Cohl says. “I demoed the whole record in this room, so at one point I had my whole recording setup here, my keyboards and a 4-track tape player.”
Photo: Wendy Goodman

The bedroom with its works of art inspired by Francis Bacon.
Photo: Wendy Goodman

The shearling jacket, a staple of Cohl’s wardrobe, hangs on the flat screen.
Photo: Wendy Goodman

Editor-in-Chief Wendy Goodman takes you to the city’s most exciting design houses and studios.

By submitting your email, you agree to our terms and Privacy Notice and to receive e-mail correspondence from us.

See also  Interview with an emerging filmmaker, musician and actor…